The Five Fear-Based Mistakes Leaders Make in a Crisis 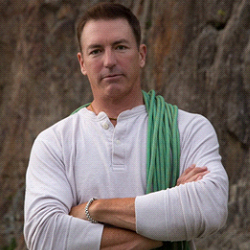 We are all dealing with uncertain times. Amidst the uncertainty lies the possibility of turning your fears into purpose, passion and performance.

In this ExecuNet Master Class session led by Patrick Sweeney, you will learn how to turn your individual and organizational fears into potential for the future.

Patrick will also offer a glimpse into neuroscience research outlined in his book, Fear is Fuel, so that you too can turn fearful situations into positive outcomes.

Patrick Sweeney is the Wall-Street Journal best-selling author of Fear is Fuel.

Inc. Magazine called him one of the most interesting people alive.

Patrick is a millionaire entrepreneur who grew up as a coward, always trying to create a carefully sculpted image to cover his shame and fear. Later in life disaster hit - a rare form of leukemia threatened to end his life when his daughter was just a year old and his wife was six months pregnant. This dramatic life challenge proved to him that everything he thought about life, love, happiness and success was all wrong.

He has appeared on CNN, ABC, CBS, Bloomberg, CNBC, New York Times, Boston Globe and many other news outlets and publications sharing the lessons he has learned.

In 2018 Patrick won the world's toughest bicycle race – the Race Across America almost 20 years after he finished 2nd place in the Olympic rowing trials.

Patrick has leveraged fear as fuel for peak performance and to create an inspiring life of passion, happiness and fulfillment, and so can you.

He is the son of 1st generation Irish immigrants and the first to go to college in his family. He teaches audiences around the globe how to break through their limits, too, using hard neuroscience.

Deadline is June 17, 2020 12:00 AM
Once you have registered, within 24 hours you will receive an email with complete instructions for joining this online interactive event.
This webinar is Expired.