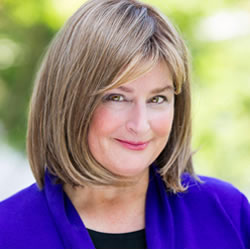 Will you be presenting a proposal to your board, speaking at an annual meeting or industry conference, giving a TEDx talk, or being interviewed by TV or print media?

What you say and how you say it either wins or loses respect for you and your organization.

Discover why Boeing, Intel, EO, Cisco, NASA, and TED Fellows have all hired Sam Horn to train their top executives in how to communicate more concisely, compellingly and convincingly.

Sam Horn is the Founder/CEO of the Intrigue Agency which helps people design and deliver intriguing communications that get people’s eyebrows UP.

She is on a mission to help people create the life, work and relationships of their dreams.

Sam has had the privilege of speaking to more than half a million people worldwide and for such organizations as Boeing, Intel, Capital One, Cisco, Nationwide, National Geographic, and YPO.

Sam served as the Pitch Coach for Springboard Enterprises which has helped entrepreneurs receive $8.8 billion (yes, that’s a B) in funding.

Sam co-founded the Business Book Festival (held at USA Today headquarters) and served as the Executive Director of the world-renowned Maui Writers Conference for 17 years where she worked with the publishing industry’s top agents, editors, authors and screenwriters.

She has helped hundreds of people create one-of-a-kind books, brands, TEDx talks, funding pitches and high-stakes presentations that added value for all involved.

A partial list of clients includes Terry Jones, Founder of Travelocity, Nell Merlino, founder of Take Your Daughter to Work Day, Larry Lynch, former Director of the Disney Institute and Sandra Joseph, who played the lead role of Christine in Broadway’s Phantom of the Opera for ten years.

Sam’s newest book SOMEDAY is not a Day in the Week shares stories and insights from her Year by the Water on how to make the rest of our life the best of our life.

It features questionnaires and interactive exercises that help readers get crystal clear about what really matters so they can bring more of that into their life starting today, not someday.

The book has been featured on Harvard Business Review’s Ascend site, on JLD’s top-ranked Entrepreneur on Fire podcast, and has received glowing reviews from Library Journal and Booklist.

Sheri Salata (Former Executive Producer of The Oprah Winfrey Show) calls Sam “one of the bright lights and most accessible wisdom-sharers in our culture today.”

Deadline is October 23, 2019 11:45 PM
Once you have registered, within 24 hours you will receive an email with complete instructions for joining this online interactive event.
This webinar is Expired.