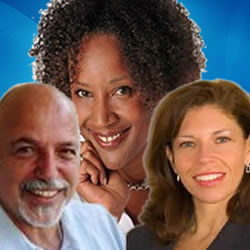 Will bias, stereotyping, prejudice or discrimination regarding your
age, race, ethnicity, gender, pregnancy status, disability,
politics or religion wreck your job search?
How about unexplained career gaps in your resume, your job-hopping , history or long-term employment with the same organization?

It can be extremely frustrating when you’re dedicated to a job search and it seems like circumstances beyond your control are against you. But there are approaches you can take to influence many important components within your control and get the interviews and offers you deserve.

Attend this special, Panel Discussion edition of ExecuNet Master Class featuring three widely respected Career Strategists and Coaches to learn easy-to-deploy strategies for overcoming the biases, -isms, and gaps in your way and successfully competing against other candidates in today’s executive job market.

Don Weintraub is Managing Director and an Executive Career Coach with ExecuNet. Previously, he was the Founder and CEO of Rainmaker Associates, a performance improvement consulting, coaching and executive search company.

With 15 years of executive recruiting experience and many more years as a CEO, COO and hiring manager, Don is a recognized expert in:

He has been a Trusted Advisor to executives and executive teams of more than 50 companies.

Saundra Botts is a Career Strategist with ExecuNet. Given most executives will not get their next role through a Headhunter she now uses the “inside information” from her prior experience in Retained and Contingency Executive Search to assist executives in career transition.

Working with such firms as WinterWyman Search, Dubin & Lee and First Call and overseeing numerous client accounts, ranging from start-ups to multi-billion dollar conglomerates, she has witnessed over 850 executive landings.

In 2008, she began facilitating workshops and webinars on the topic of “LinkedIn for Jobseekers” and was a featured lecturer on LinkedIn for Hult International Business School’s MBA and MA programs’ job search curriculum.

Andrea Briscoe is an executive coach, diversity specialist, professor and career coach with expertise in helping executives create an impactful resumé and interview with skill and ease.. She has served as a corporate human-resource partner and consultant for many elite firms, including KPMG, the (AICPA) American Institute of Certified Public Accountants, Guardian Insurance and Merrill Lynch.

Deadline is May 8, 2019 5:00 AM
Once you have registered, within 24 hours you will receive an email with complete instructions for joining this online interactive event.
This webinar is Expired.