How can you measure the value of customer relationships?

Ask yourself, how much time do you think they willing to give you, and how much importance do they put on hearing from you, or even better – on doing business with you.

In their classic book, Positioning: The Battle for Your Mind, Al Ries and Jack Trout said that most people could only remember a few things about any given company. When a company tried to communicate a message with a prospect or customer, they were competing with millions of other messages in a noisy marketplace. If they thought the noise was bad 30 years ago, consider what it’s like today!

Take a look at the following visual: 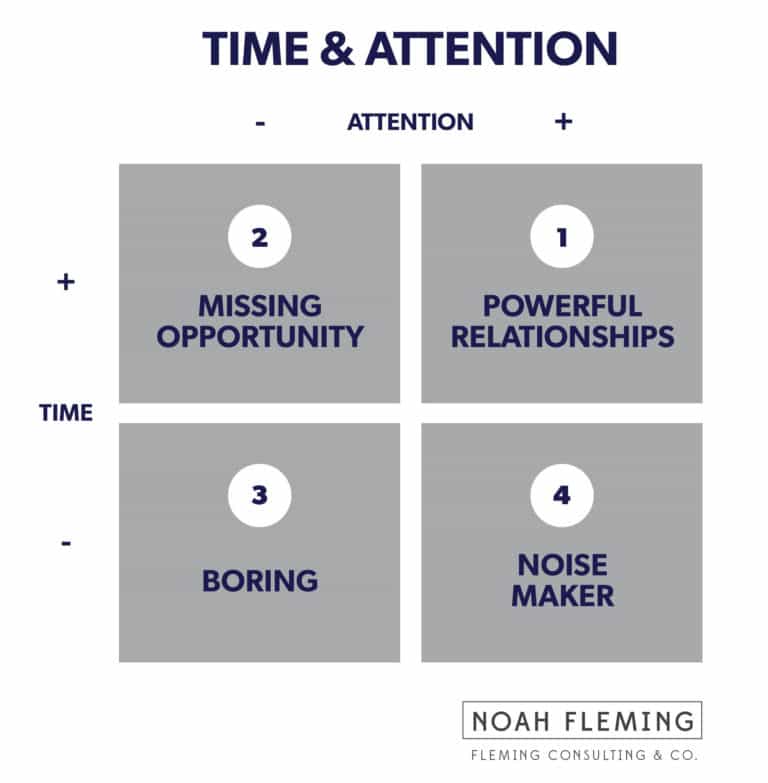 We have four quadrants representing the correlation between the time and attention a customer or prospect is willing to give to you.

#4 – Noisemaker – Here we have a business that makes a lot of noise in the marketplace, but falls short on delivery, or doing anything meaningful keep customers and prospects motivated and engaged.

#3 – Boring – These businesses and brands spend an absolute fortune on customer acquisition, and they’re terrible at keeping customers once they’ve got them.

#2 – Missing Opportunity – Here we’ve got a business that is given the benefit of time from prospects and customers, and they get it almost organically – meaning they don’t need to make a lot of noise. They’re good at what they do. But they’re missing a tremendous opportunity to move into quadrant one.

#1 – Powerful Relationships – In this quadrant, we have the making of a dominant company, one that resonates with prospects and customers alike. This is where the real magic happens. This is where brands like Harley, Disney, and even small town restaurants are dominating their competitors. Customers and prospects alike are willing to give them their time and attention because they’ve earned it.

Where would you put your company?

The big overarching secret is to eschew the current media and become your media channel. I’ve talked about this recently. You need to move customers and prospects alike from the vast, chaotic Facebook world and into your world.

To do that, there are three big areas to consider. They are:

Community: This is about creating a sense of community for your customers (and prospects.) It’s about bringing people together around what you do and letting those outside of it, peak in the windows and come in when they’re ready. The concept of Community was covered in great detail in my first book, Evergreen.

Authority and Credibility: Are you the undisputed leaders of your industry? What would you do to increase your authority, celebrity, believability, and credibility? The intersection of time and attention is about increasing it with current customers and prospects but ignoring everyone else. What could you create that builds a sense of celebrity and credibility? Could you write commercially published books for your industry? Could you speak at industry events positioning you as an authority in the eyes of your customers? Could you publish a daily video blog?

Visibility & Diversity: How often are you showing up in their mailboxes; on the doorsteps; in their inboxes? Don’t be omnipresent to everyone; be ubiquitous to your ideal prospects and current customers.

To win the battle for your customer’s mind, you need to understand that you’ll only do it if they’re willing to give you the time of day combined with their precious resource – their time. Thankfully, you can forget the billboards, skip the Super Bowl ads, and forget the pens and mugs. You can stack the deck in your favor with a better understanding of positioning yourself in the eyes of your customers and not worrying everyone else. Instead of trying to break through the noise in their busy world, create your own and bring them into your atmosphere.

Time and attention are two of the most valuable resources on the planet. Once you get it, you better hold on to it with all you’ve got.

A Challenge For This Week: Review the visual above and consider the following:

Where are you on this chart?

Are you a noisemaker, boring, missing an opportunity, or continuously building powerful relationships?

Let me know where you’d put your company.

Now here’s the most important part of this challenge. If we were to talk to your customers, not survey them, but actually talk to them one-on-one, would they agree with your assessment?

I mean, what if they wouldn’t even give us the time of day?