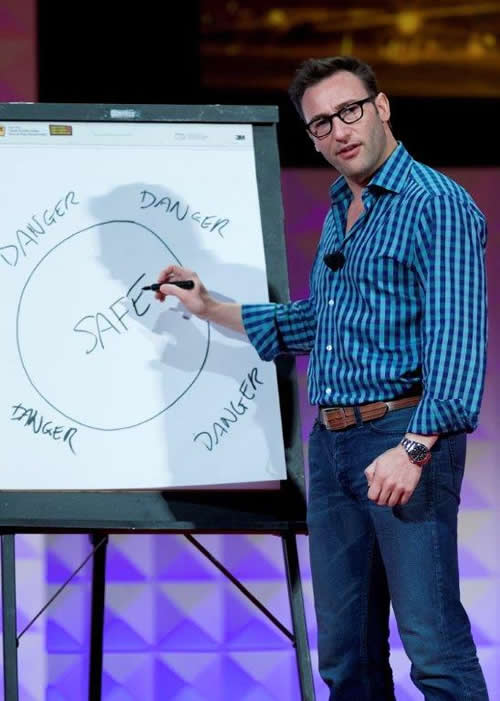 Simon Sinek is fascinated by leaders and companies that make the greatest impact in the world, discovering some remarkable patterns of how they think, act and communicate. He applies evolutionary theory to management in order to teach leaders and organizations how to inspire their people. Through his analysis of the evolutionary roots of leadership he has arrived at a greater understanding as to how we go about creating environments in which people naturally work together to do remarkable things.

Human biology has not changed in thousands of years, our environment certainly has. In workplaces where cynicism, paranoia and self-interest can be rife, great leaders sacrifice their own comfort for the good of those in their care. Sinek cited examples of where the military could teach corporations a great deal about leadership. The first example was the story of a pilot who flew into conditions no one would expect him to fly into. The pilot’s reasoning was simply, “They would have done it for me.” The second example was how in the Marines the higher one’s rank, the further back in the food line they go. The reasoning is that the officers make sure their men are cared for before they are. They believe leadership is a responsibility, not a perk.

Sinek said, “In the military they give medals to people who are willing to sacrifice themselves so that others may gain. In business we give bonuses to people who are willing to sacrifice others so that we may gain.” Sinek wondered why we don’t get to work with people with the mindset of the military. Initially, he figured they were simply better people and they were drawn to the military’s notion of service. But the more he studied the question he realized it was not the people – it was the environment. “We are social animals and we respond to the environments we’re in. You can take a good person and put them in a bad environment and they’ll be capable of doing bad things. Likewise, you can take somebody that society has given up on, someone who may have even done bad things, and if you put them in a good environment, they’re capable of doing remarkable things,” said Sinek.

As social animals, we need each other, and we tend to conform to the group’s ideals. We behave in ways that lead to acceptance by the group and therefore feel safe with that group. “When we feel we are in a circle of safety we naturally combine our efforts, face the dangers and seize the opportunities together,” said Sinek. This feeling of safety is a product of environment. Leaders set the environment. Leaders set the tone. “If you work in a company where it is standard practice to send CYA emails. This means you work in a company where people don’t feel safe in their own company and feel forced to spend time and energy out of their day to protect themselves… from each other.” These feelings cause us to take time and energy away from protecting the company from outside dangers and instead protect ourselves from our own leadership. Ultimately, this hurts the entire organization.

Corporate vision statements are useless, according to Sinek. The problem is they are not specific enough. People need to be able to see progress toward a goal, but abstract vision statements do not allow for that. People want the dopamine hit that comes with achievement. “In an unbalanced corporate environment in which the only means in which we incentivize our people is to give them the goal and give them bonus, we can create an environment where people are actually addicted to performance. These are the unhealthiest environments in the world for human beings to work. We become so obsessed with making the numbers and getting that dopamine hit that we, like all addicts, will beg, borrow and steal to get it. We will stab each other in the back, and we certainly don’t trust each other and we certainly don’t cooperate,” said Sinek.

Serotonin is the leadership chemical and can be created through face-to-face public recognition that makes one feel valuable to the group. When leaders look to create serotonin enhancing moments the recipient will feel grateful and will seek to repeat the behavior to receive more. Leaders who lead this way are viewed as selfless and are much more appreciated by the group. This type of leader is viewed as sacrificing their interests by not taking the credit for themselves and giving it to another. The recipient of this “gift” will want to make the giver proud and will feel protective of them.

“The cost of leadership is self interest,” said Sinek. The leader is expected to protect the group from danger. Historically, the danger would be from a ferocious animal, but in today’s world the danger would be from another business or a loss of revenue. Great leaders are expected to sacrifice their own bonus or salary to protect the jobs and salaries of their employees. The employees never begrudged the leaders their higher wages and better offices because the understanding was the leader would step in the way of danger if it came. The leader who, when times are tough, steps aside and allows his employees to get sacrificed violates the human definition of what it means to be a leader. Great leaders would never sacrifice people for the numbers. They sacrifice the numbers to save the people.

The choice to be a leader is a lifestyle decision; it means you are willing to take care of others. “When the environment is that we feel our leaders would sacrifice their interests to look after us, we reward them with our love and loyalty, and we will work with blood, sweat and tears to see their vision come to life. But if we suspect that leader operates for self-interest and self gain and would throw us under the bus to get it… we respond exactly the same way to protect ourselves.”

No Replies to "Simon Sinek: Why Leaders Eat Last"