The Role of His Life

Whether it is your family, career, or country, one of the hallmarks of an effective leader is how much you inspire others. 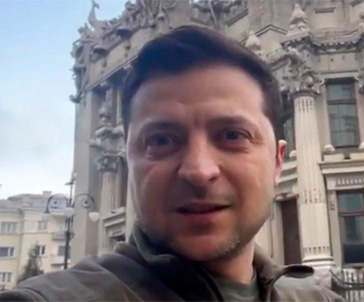 Ukrainian President Volodymyr Zelensky is the human embodiment of inspiration. It’s not about lofty titles with him. There is honesty and inspiration in his look, his words, and his actions as the mighty Russian military quite literally comes for him. He is easily someone who people can understand and get behind. A different person might have been less effective at literally rallying the world behind his country, but Zelensky has a way of being seen for who he is, for standing in the moment, and the world has responded in ways it never has before.

That is what real leaders do.

When a reporter asked Zelensky if he realized he was becoming iconic, Zelensky responded, “I’m not iconic. Ukraine is iconic.” There is a genuine purity in how he speaks that people respond to. One translator broke down in tears on live German TV and couldn’t finish interpreting his words because Zelensky was so moving. That is a leader who is far beyond the political and has learned to touch hearts and minds.

What he is demonstrating is a remarkable ability to control the narrative.

Some ways in which he’s done this:

He may have created a new term: The Zelensky Effect. It’s the ability to rise to the occasion and rally people who matter behind you, through both a pure and powerful narrative and courageous actions that speak louder than words. That is what controlling the narrative allows a leader to do.

This skill is vital in every situation. Skill at controlling the narrative is a key element in determining your success whether you’re leading or pivoting. It’s not your job title or list of past roles that move you forward and rally people behind you; it’s your ability to rise to the occasion, stand in the moment with conviction, and make things happen.

Each day, as we watch the war on the news, take special note of President Zelensky when he speaks. In the not-so-distant future, our grandchildren will be learning about his words and actions in History class. That’s how remarkable his leadership has been. While we will never have his challenges, we can all learn from his example.

No Replies to "The Role of His Life"