Recruiter Confidence Dips Sharply in August: A Change in the Executive Job Marketplace?

The August results are in, and it is not a pretty picture.

Confidence levels on the part of recruiters (and our exclusive Recruiter Confidence Index) peaked in the middle of 2018 and have now dropped from over 70% to 40% at the end of August (see chart). 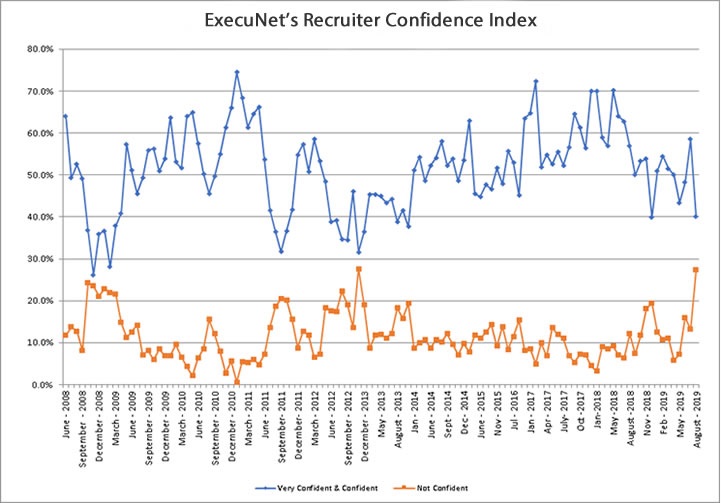 As important, the number of recruiters Not Confident jumped to 27%.  These levels have not been seen since late 2013 and in the last recession in 2008.

Our exclusive Executive Job Creation Index (JCI) parallels this change. We have seen real weakening over the last three months, in particular. The percent of companies expected to add jobs is still at 20% (1 in 5) but the number not adding new executive jobs climbed to 27% in August,  and the percent not filling open positions or eliminating climbed to 10% in August – the highest it has been in since 2016 before the election.  So some segments and companies are adding executive jobs, but most are retrenching.

We are not predicting a recession by these numbers but these attitudes on the part of executive recruiters indicate that at the very least many fewer companies will be adding new executive-level jobs, than have been over the last two years.

For the job seeker, this means:

With recruiters anticipating this downturn in the executive job market, it’s vital you are working directly with ExecuNet Career Strategists to go from a good candidate to a great candidate. Submitting applications and praying is not a viable job search strategy!

Now is the time to protect your career! Become a VIP ExecuNet member. When you do, you’ll make the same choice thousands of other executives have made to expand their network and attract recruiters. You’ll have access to premium content explaining what is working in today’s executive job search market, and you may sign up for a consultation with one of our career strategists for an assessment of your job search materials and strategy. All of ExecuNet’s strategists are senior-level and more than qualified to work with the caliber of person in our network.

Give VIP membership a try! Give your free consultation with a strategist a try… you won’t be disappointed!

No Replies to "Recruiter Confidence Dips Sharply in August: A Change in the Executive Job Marketplace?"