How to Never Lose Your Candidate to a Counteroffer 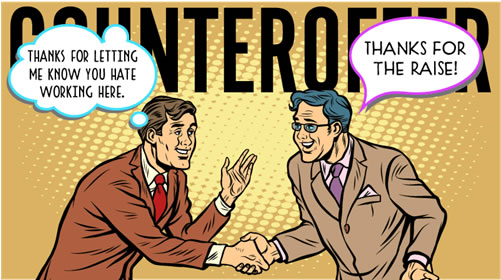 I almost never lose candidates to a counteroffer. And it’s not because I have some special hypnotic power over candidates. I wish.

No. I’m just neurotic. So, I plan for the worst and hope for the best. If you do the same, you’ll almost never lose a counteroffer fight.

(1) Don’t be lazy. Remember the last time you lost a candidate to a counteroffer and how much scrambling you had to do. I never forget that pain.
On the very first phone screen with a candidate, I bring up compensation.

(2) I’m focused on candidates who are currently earning 20% less than my budget for this role. If they’re already making the same as I can afford, they’re unlikely to make the move… so I’m unlikely to invest the time.

Plus, if they do receive a counteroffer at the end of the process, their late-to-the-game employer will still be paying them what I’ve budgeted. So they’re unlikely to take the counteroffer. Plan ahead by targeting the right candidates.

(3) On that same first phone screen, I also ask my candidate in what ways they are unsatisfied, unfulfilled, and frustrated. I write these down. We’ll need them later.

(4) When extending the verbal offer, I explain two things (a) I have a backup candidate that I’m not prepared to lose, so this deal must be closed promptly, and (b) because you’re a Rockstar candidate, you’re going to receive a counteroffer from your employer.

They swear up and down: “No. No. My company doesn’t do counteroffers. And even if they do, I’m not open to it.”

(5) I role play with my finalist… “How are you going to handle the counteroffer?”

I ask when, how, and where they plan to resign? And what they’ll say to their manager. I want them to hear the words coming out of their own mouth. I also talk about the guilt they’re likely to feel, particularly if they like their manager.

(6) I remind them that research shows that accepting a counteroffer is almost always a CLM – career limiting move. Even if your boss comes through with more money when a gun is put to his head, you’ve broken the sacred bond. Your boss knows that you’re uneasy and he’ll never count on your loyalty again.

It’s the beginning of the end. 6-12 months later, I’ll bet a steak dinner that you’ll be gone. And of course, this opportunity won’t be available, so what will you do then?

I never do this from a position of fear or cruelty. It’s just reality.

Because candidates who are early in their career haven’t yet learned that taking a counteroffer is a bad idea.

Often, I’ll send them a fact-based study such as this recent one from HBR Harvard Business Review.

That way, if my first choice falls prey to the temptation of a counteroffer, s/he doesn’t leave me in a bind. And I give them only 24 hours to sign my written offer letter. No signature, and I move on to my backup candidate.

But if you plan for them, you’ll land your first-choice candidate almost every time.

My team just created a 60-second quiz to pinpoint your #1 hiring challenge and what you should do about it.