Lessons From the Godfather of Strategic Conversation

In this excerpt from their new book, Moments of Impact, authors Chris Ertel and Lisa Kay Solomon tell the story of Pierre Wack, the oil executive who used the art of conversation to revolutionize Shell.

Pierre Wack may be the most influential business guru of the past half-century that you’ve  (probably) never heard of. In another era, it’s hard to imagine a student of Sufi mysticism who burned incense in his office getting much traction as an oil industry executive.

But Wack’s tenure as head of the legendary group planning team at Royal Dutch Shell came at a time (1971-81) when that industry, and the world around it, was changing rapidly.

By the early 1970s, oil executives were forced to cope with a daily reality of high volatility, uncertainty, complexity, and ambiguity – in the form of unpredictable swings in the price of oil.

The price of oil matters a great deal in planning operations for an oil company.

A faulty forecast can easily cost an oil company billions of dollars. Yet, decades of experience show that nobody can reliably predict the price of oil.

Learning to “Think the Unthinkable”

When Pierre Wack assumed his new leadership role in 1971, Shell’s top executives were already frustrated with the limitations of traditional strategic planning. They knew that the usual approach—to try to analyze their way out of uncertainty—wasn’t working. But they had little idea what to replace it with.

Wack didn’t know what to do either, but he was a free spirit with a willingness to experiment. He had studied the work of Herman Kahn, a brilliant US military planner who was the inspiration for the title character in Dr. Strangelove, the classic dark comedy by Stanley Kubrick.

During the Cold War, Kahn taught military planners how to “think the unthinkable” using scenario planning and other war-gaming techniques to anticipate potential moves of the Soviet Union and other countries, with the main goal of preventing thermonuclear war.

Wack embraced scenario planning—which others at Shell had already experimented with—as a supplement to traditional approaches.

Instead of trying to predict the future price of oil—a fool’s errand—his team created detailed, divergent scenarios about why and how the price might swing sharply up or down, which they used to test the robustness of different strategies.

Learning How to Listen

While this approach made sense in theory, Wack’s early attempts fell flat. He and his team would spend months researching all the key topics and analyzing and synthesizing them into clear communications packages. But their early scenario reports bounced right off Shell’s managers, getting him—and them—nowhere.

During a sabbatical year in Japan, Wack spent a great deal of time studying the difference between an effective report or plan and an ineffective one. His simple but important conclusion would have a decisive impact on the future of Shell—and on strategic conversations—for decades to come.

Years later, in an article for Harvard Business Review, Wack described his insight:

I have found that getting to that management “Aha!” is the real challenge… It does not simply leap at you when you’ve presented all the alternatives, no matter how eloquent your expression or how beautifully drawn your charts. It happens when your message reaches the microcosms [mental models] of decision makers, oblige them to question their assumptions about how their business world works, and leads them to change and reorganize their inner models of reality.

In other words, Wack realized that he and his team needed to focus much less of their energy on the brilliance of their analysis and much more on the mind-set and concerns of their audience.

Learning How to Break the Ice

It’s rare for people to change their opinions when confronted with inconvenient facts. The only way to change minds, Wack realized, is to build on managers’ existing knowledge and experience rather than argue against it. This basic insight had a number of important implications for how he and his team worked.

First, they needed to understand—and empathize with—the perspectives of managers from the inside through deep interviewing and other techniques.

Next, their presentations had to get well beyond “the facts.” They needed to create stories and visuals that would resonate with managers’ existing mental models and tap into the emotional pattern-recognition parts of their brains—not just their analytic circuits.

Wack would treat this baseline scenario with due respect and show that many of its assumptions were valid. Then, he’d gradually expand the managers’ field of vision by holding up a mirror to their perspectives, turning and twisting it from multiple angles.

In doing so, Wack was bending and expanding the managers’ mental models one step at a time—rather than breaking or replacing them. In one article title, Wack coined a poetic term to describe his approach: “The Gentle Art of Re-perceiving.”

Reaping the rewards of strategic conversations, Wack and his team went on to have a legendary impact on Shell. Their work helped the company anticipate the OPEC oil embargo of 1973 and the massive disruption of oil prices in 1979, and to hedge against these huge events well in advance.

It gave company leaders the courage to take a strongly contrarian position; at a time when everyone else was buying tankers, Shell was unloading them. As a result, Shell leapfrogged from an also-ran among the large oil companies to an industry leader during this era.

Wack and his group planning team became heroes, and Shell continues to invest in their methods to this day. 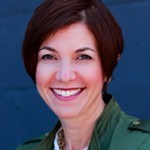 Lisa Kay Solomon is the founder of Innovation Studio and teaches innovation at the groundbreaking MBA in Design Strategy program at San Francisco's California College of the Arts. She is coauthor of Moments of Impact: How to Design Strategic Conversations that Accelerate Change (Simon & Schuster, 2014), a book that offers a simple creative process to help leaders and teams tackle their most challenging issues. Learn more about Lisa and her work at http://lisakaysolomon.com/

No Replies to "Lessons From the Godfather of Strategic Conversation"