Give and Take: A Revolutionary Approach to Success 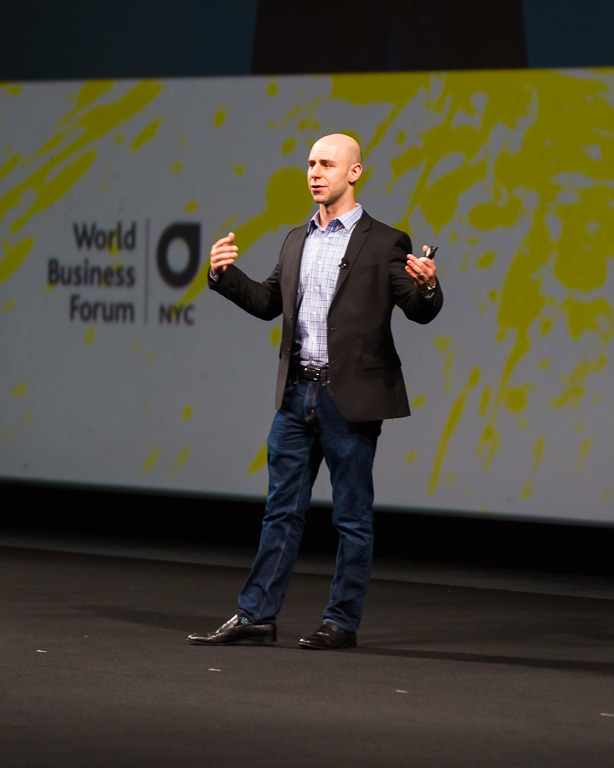 Adam Grant – tenured professor at Wharton while still in his twenties, honored with Wharton’s Excellence in Teaching Award, New York Times bestselling author, recognized as one of HR’s most influential international thinkers – is one of today’s most influential social scientists. Based on his research, it is his assertion that success today is increasingly dependent on how we interact with others rather than on individual drivers of success such as passion, hard work, talent and luck. It turns out that Givers – people who contribute to others without expecting anything in return – are much more likely to achieve extraordinary results across a wide range of industries.

One’s “style of interaction” is the mindset one exhibits when exchanging something of value with another person. One style is “Takers” – people who are always trying to receive and avoid giving back as much as they can. Socially adept, they volunteer for high visibility assignments, leave the grunt work to others, and claim the lion’s share of credit. On the other end of the spectrum are “Givers” – people who share their knowledge freely, support others, show up early and stay late. In between are the “Matchers” – people who try to keep an even balance between give and take, a “you do something for me and I do something for you” mentality.

Givers can be the worst performers. The reason being, they spend too much time and energy helping others. Givers can also be great for an organization. “If you want to boost profits, customer satisfaction, retention, or lower your operating costs, one of the best investments you can make is to get more Givers in your organization. Givers add more value than Takers and Matchers,” said Grant. Givers are willing to do things that, while not in their job description, are critical for organizational effectiveness. They make other people more successful, and they sacrifice themselves in the process.

Takers tend to rise quickly, but they don’t have staying power and fall to Matchers. Matchers are the “Karma police,” making it hard for Takers to maintain their success. Additionally, other Takers see each other as threats. Grant’s research has shown that Matchers go out of their way to reward Givers for their selflessness.

In the short run, Givers may be inefficient because they are expending time and energy helping others solve their problems, but in the long run the Givers can actually benefit. The time they spend solving others’ problems can make the Givers better at solving an organization’s problems. “Givers learn more than Takers and Matchers. All the contributions they make helping other people allows them to pick up new knowledge, skills and expertise,” said Grant. Additionally they gain tremendous social capital that they can benefit from.

When hiring, you want to build a culture of giving. It takes multiple Givers to counterbalance one Taker, so it’s important to weed out the people who take credit but not blame, the people who put their energies into being popular with their superiors but do not have time for their peers and subordinates. A culture filled with Givers and Matchers is a culture of giving and excellence.

Relationships are a big part of the success of Givers. Grant describes effective giving as “not trying to be Mother Theresa or Gandhi… instead you should do five-minute favors.” A five-minute favor is a small way to add value to other people’s lives, a micro loan of your talents, skills, connections. This approach prevents Givers from over-giving and suffering as a result of their nature. Additionally, Grant has found that Givers should focus on one or two specific forms of giving that they enjoy and excel at and then let other people do the rest; they don’t need to be all things to all people. This approach allows Givers to have the most impact and be energized not drained.

Companies tend to reward individual success… an environment that attracts Takers. To create a culture of giving you want to go beyond rewarding individual success. It is important to identify an individual’s impact on others. The key is having people who can drive their own success and contribute to the success of others. Reward the people who are contributing to other people’s lives.

To promote giving, build a culture of help-seeking. It may sound counter intuitive, but giving is initiated by a request for assistance. “Evidence shows that 75 to 90 percent of all acts of giving in organizations are initiated by someone asking for help,” said Grant. “Asking for help catalyzes a culture of giving.” In such a culture, Takers end up giving significantly more than they are inclined to avoid being identified as a Taker – something that would be a threat to their success. Matchers will realize trading favors is less efficient than giving to as many people as possible. This creates a rising tide lifts all boats mentality.

The very stories people make about success will change if you can screen out the Takers from your organization; if you can get people to do more specialized five-minute favors; if you can go out of your way to reward contributions to others’ success, not just individual achievement; and if you can get people to ask for help. In truth, one’s approach to human interaction can be as big a factor in success as motivation, ability or opportunity.

No Replies to "Give and Take: A Revolutionary Approach to Success"