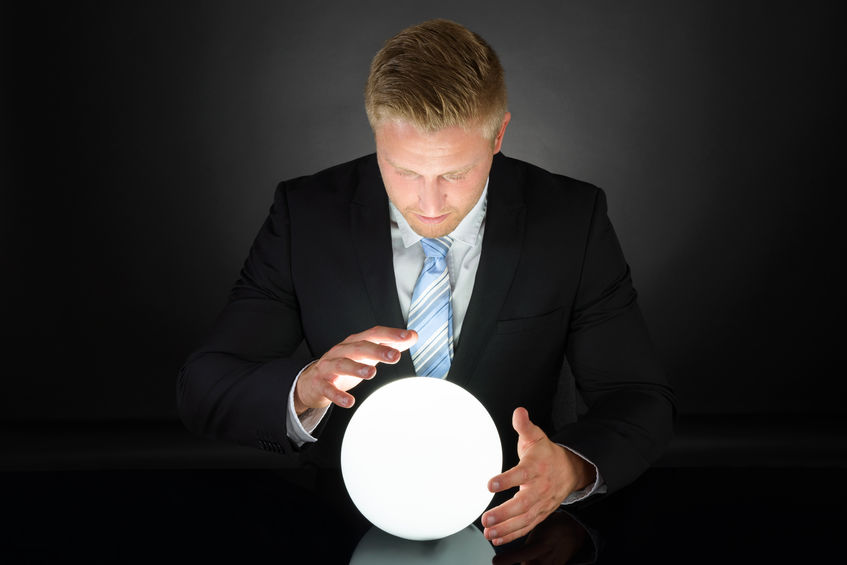 In the last three weeks, I have had several senior researchers from different organizations ask about these future-oriented subjects and, in particular about the “latest” approaches, including agent-based modeling, big data and analytics. Given this recent interest, it might be worth thinking about why we are so fascinated about the future.

From time immemorial, mankind has sought ways to look into the future, finding means and tools as diverse as examining animal entrails, consulting oracles and seers, astrology – and now forecasting, mathematical modeling, and scenario development.

The accepted “founder” of future studies was H. G. Wells. His Anticipations of the Reaction of Mechanical and Scientific Progress Upon Human Life and Thought: An Experiment in Prophecy, was first published as a series in The Fortnightly Review in 1901. But the “science” of futures studies emerged in the early 1960s, with Herman Kahn in the US, Bertrand de Jouvenal in France, and Dennis Gabor a Hungarian-British scientist. There have been many remarkable forecasts that were correct, and many that were incorrect. A listing of some of these can be found below.

So why have we always had such a desire to know the future? The most likely explanation is that it originated as a survival need. What is likely to happen that may kill us or cause problems? And how can we prevent that from happening? Then, once we survived, the question that emerged became: How can we improve things? So the driving force is about understanding change – minimizing the negative effects, maximizing the positive ones. More recently, we have realized that, if we are bold, we can shape and create the change we want – as individuals, organizations, and perhaps even on larger scales. So we need to be clear that we are not looking at the future as an intellectual exercise – it is always to think about its implications for the future of an organization or nation – and to develop strategies and plans accordingly. I am concerned, when I get asked questions about latest techniques, whether people are really aware that the forecasts and forecasting techniques are less important than the thought processes that go into them, and the implications of them. That is where their real value lies. Indeed, with big data and the analytics that go with them, it is less likely that people will actually see the raw data, or pay attention to the assumptions, and thus are likely to miss many of the relationships and nuances that can often be seen by knowledgeable people.

The point about the failures is that, even when we have a sophisticated understanding of the way some aspects of the world work, and have built remarkable mathematical models, we still cannot predict with absolute certainty. I have had some quite amazing results predicting technologies, changes in society and more – but I attribute those more to luck and being able to develop scenarios and play “what if?” games in my head than ability in specific forecasting techniques. Every aspect of the world is in continual motion, shifting, swirling, changing relationships – it is composed of highly complex, non-linear systems of systems, all interacting with one another. The butterfly effect that emerged from chaos theory, describes the sensitive dependence on initial conditions in which a small change in one state of a deterministic nonlinear system can result in large differences in a later state. This can be seen clearly in forecasting the weather and climate change. But should we even try to predict, especially using big data and highly sophisticated models? Or could reliance on such models prevent us from accepting the real value of foresight which, to me, is to make us think. Thinking about the future and its implications in the context of a logical framework can help us explore possibilities and options, and connect dots between apparently disparate trends and events, so that we can plan and be ready and sufficiently agile to deal with whatever comes – both good and bad.

Too often we hear leaders of organizations discussing the future as if it were inevitable; as if organizations must expect to be battered about by circumstances; as if they have no power over their own future. Most organizations – both large and small – have much more ability to determine their own future than they realize. It just takes some effort to look longer term and see themselves and their strategic environment differently, and then be willing to change as necessary.  My book, Strategy with Passion and previous articles on BIZCATALYST 360° offer approaches for this.

There are many, many tools and techniques for exploring the future, ranging from highly quantitative models to those using subjective judgment and creativity. There are exploratory forecasts that look out at many possible futures, and normative forecasts that take a desired end-state and find ways to achieve it. In practice, most futurists cycle between the two, using various methods (scenario development, matrix techniques, morphological analysis, and recently, agent-based modeling, for instance) to narrow the range of options. Two good resources for identifying these techniques are:

“Fooling around with alternating current (AC) is just a waste of time. Nobody will use it, ever.” Thomas Edison, American inventor of direct current (DC) and entrepreneur, 1889.

“I think there is a world market for maybe five computers.”   Thomas Watson, president of IBM, 1943

“Television won’t be able to hold on to any market it captures after the first six months. People will soon get tired of staring at a plywood box every night.” Darryl Zanuck, executive at 20th Century Fox, 1946

“There is no reason anyone would want a computer in their home.” Ken Olsen, founder of Digital Equipment Corporation, 1977

“Almost all of the many predictions now being made about 1996 hinge on the Internet’s continuing exponential growth. But I predict the Internet will soon go spectacularly supernova and in 1996 catastrophically collapse.” Robert Metcalfe, founder of 3Com, 1995

“Everyone’s always asking me when Apple will come out with a cell phone. My answer is, ‘Probably never.’” David Pogue, the New York Times, 2006

“Two years from now, spam will be solved.” Bill Gates, founder of Microsoft, 2004

Tanks – In H.G. Wells’ 1903 story The Land Ironclads, published in the Strand Magazine, he took the then-current technology of metal-hulled warships and put them on land, creating war machines that are the precursors to the modern tank.

Earbuds – By the time Ray Bradbury published Fahrenheit 451 in 1953, portable audio was a reality. But headphones were massive, over-the-ear contraptions that weighed a ton. That’s why his description of “little seashells… thimble radios” that brought an “electronic ocean of sound, of music and talk and music and talk” is so affecting. He’s precisely describing the earbud headphone, which didn’t come into serious popular use until 2000.

Video Chat – The first demonstration of consumer video conferencing came at the 1964 New York World’s Fair, where AT&T wowed crowds with its “picturephone,” but the first sci-fi discussion of video phones came in Hugo Gernsback’s ancient serial Ralph 124c 41+. The tale, which saw print in Modern Electrics magazine in 1911, included a device called the “telephot” that let people have eye contact while speaking across long distances.

The Moon Landing – Jules Verne was one of the most prolific and inventive sci-fi writers of the 1800s, and he posited a variety of science, some solid and some ridiculous. One of his most famous works, From The Earth To The Moon, predicted many aspects of the 1969 manned lunar landing of Apollo 11. Verne’s astronauts were launched from a Florida site in an aluminum capsule. He even did remarkably accurate calculations as to the amount of force that would be needed to propel the rocket out of Earth’s atmosphere.

The Cold War and Mutually Assured Destruction – In 1940, Robert Heinlein wrote the short story “Solution Unsatisfactory,” which posited a future world where America develops an atomic weapon that ends World War II unilaterally. After they use it, it spurs the rest of the world into a nuclear arms race to keep up. The story was written before the United States had even entered World War II and five years before the bombing of Hiroshima and Nagasaki. Heinlein’s vision of mutually assured atomic destruction served as a terrifying blueprint for the Cold War.

Antidepressants – Aldous Huxley’s Brave New World is one of the most prophetic sci-fi books ever published, with remarkably trenchant observations for 1931. Probably the most relevant of Huxley’s creations is soma, the mood-altering medicine that keeps the citizens of London in 2540 sane. Antidepressants didn’t become the subject of any real scientific experimentation until the early 1950s.

The Surveillance State – When George Orwell wrote 1984 in 1949, the concept of a dystopian state monitored by an interconnected web of security cameras seemed absurd. Fast forward to the 21st century and there are over 32 closed circuit television cameras within 200 yards of Orwell’s home. Video surveillance is an inescapable part of public life, with cameras in both public and private spaces.

Geostationary Satellite Communications – One of the biggest advances in human civilization over the last century has been our communications networking. In 1945 Arthur C. Clarke wrote a manuscript called The Space-Station: Its Radio Applications. It posited geosynchronous satellites (a hot topic at the time) being used for telecommunications relays, most notably for television signals, but this was before broadcast television was anything like a commercial concern.

Electric Cars, Detroit Techno and Hookup Culture – John Brunner’s Stand On Zanzibar is recognized as the most prophetic science fiction novel ever. Published in 1969, it posits a future America of 2010 that sounds eerily similar to the one we live in now. Under the leadership of President Obami, the United States is plagued by random acts of violence including school shootings, as well as terrorist attacks. Cars are powered by rechargeable electric fuel cells, Detroit is an abandoned wasteland with a new style of electronic music. And young men and women are eschewing marriage for short-term, low-commitment hookups.

Christine MacNulty has forty years’ experience as a consultant in long-term strategic -planning for concepts as well as organizations, futures studies, foresight, and technology forecasting, technology assessment and related areas, as well as socio-cultural change. For the last twenty years, most of her consultancy has been conducted for the Department of Defense and the Services, NATO ACT, NATO NEC, the British Army’s Force Development & Training Command, and the German BBK. Prior to that her work was in the commercial arena where she had Fortune Global 500 clients. During the last thirty-five years Christine MacNulty has contributed methods and models for understanding social and cultural change through people’s values. She was elected a Fellow of the Royal Society of Arts, Manufactures and Commerce in 1989. She is the coauthor of two books: Industrial Applications of Technology Forecasting and Strategy with Passion – A Leader’s Guide to Exploiting the Future. Her paper: “Method for minimizing the negative consequences of nth order effects in strategic communication actions and inactions” was published in NATO Defense Strategic Communications Journal, p 99, Winter 2015. Two monographs “Truth, Perception & Consequences” (2007) and “Transformation: From the Outside In or the Inside Out” (2008) were published by the Army War College. Perceptions, Values & Motivations in Cyberspace appeared in the IO Journal, 3rd Quarter, 2009, and The Value of Values for IO, SC & Intel was published in the August 2010 edition of the IO Journal.

No Replies to "Forecasts vs Implications"