Flying back from North Carolina yesterday (Grandpa sends his regards), I gazed down the runway. I’m still awed by the miracle of human flight. But I was looking down the runway for another reason…

Moments earlier–racing to the gate–I’d been talking with a client… she’s CEO of a VC-funded company, and she was flummoxed by a situation. Perhaps you can identify…

The VP Marketing she hired a year ago was already hitting a ceiling. “He isn’t scaling as quickly as the business is scaling.”

“Ah, the Peter Principle at work.” I said. He’s hitting his level of incompetence.

I asked her how and why she hired him.

She had committed virtually mistake in the book – she hadn’t bothered to read the safety card in her seat pocket.

She loved his resume. His fancy-pants schools. He worked for this company (rhymes with Boogle) and that (rhymes with Racebook). He seemed super-smart. None of which are predictive of much. But her cardinal sin was hiring him into the role he was already doing. Instead of hiring for potential, she hired for experience. 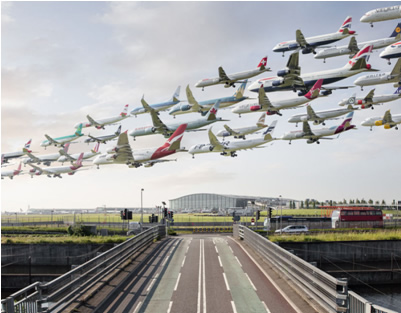 Which begs the question:

How do you assess if your candidate has runway ahead?

First, understand how vital this is. If you want a prayer of successfully scaling your company or department, you’d better be looking for people that can take off with it.

Because it means you’re hiring someone who’s at one end of the runway with 5,000 feet still ahead. And not just fast in motion but quickly approaching the end of their runway, like most hiring managers do.

It feels less bumpy and “safer” to hire the latter.

That candidate is already doing the job you’re trying to fill. They have the same title. The same compensation.

(In which case, ask yourself why would they come in the first place?)

In my 25 years of headhunting experience, that person likely brings baggage that exceeds the weight limit. So you wind up re-training and re-tooling them only to find that they’re unable to do the next job.

And that means maintenance delays.

I do four things to ensure that candidates can transition from the 727 to the 747 to the Dreamliner to the SpaceX Rocket:

Instead of simply looking at their current role, look at their promotion path. Trace the journey they flew to get here. Did their current manager promote them time and time again? Give them the most important projects? Put them in dire turnaround situations? (Or did they just bail out?) This is a great clue that their manager saw they could take on more and more and more. Runway ahead.

Drill into how they solved the problems they faced. Look for “cognitive ability” (not IQ or GPA!). What questions did they ask? What data did they look for? What hypotheses did they form? How did they quickly test their assumptions? Were they open to input? How resourceful were they in finding answers?

I look for curiosity. It’s in the questions they ask me. The questions they ask themselves. In reference checks, I validate that they are curious about the world, the business, the competitors. Do they question the status quo? Annoying at times? Sure. Vital to scale a business? Without question!!

I adore adversity. Show me a candidate who’s faced a lot of it, and I’ll show you someone who can pilot your business to the destination. With fuel still left in the tank.

In short: when you’re taking off, you care how much runway lies ahead of you. Not how much is behind.

To help you avoid the bumpy landings, my team created this 60-second Recruiting quiz.

No Replies to "Your Flight Confirmation"