How Emotionally Contagious are You?

“I’m anxious to have the opportunity to speak with you…” That was the first line in an email an executive I was working with asked me to look at before he sent it out. He was going to send this to an interviewer and potential future boss with whom he had a prior history with. He was excited at first because he knew the guy well, but when he didn’t get his calls returned or emails answered, his emotions started to shift. The second definition in the oxford dictionary for ‘anxious’ is, “wanting something very much, typically with a feeling of unease.” I suggested he changed that word to ‘excited’ or ‘looking forward to’ along with some other tweaks. Our underlying emotions spill out via our choice of vocabulary.

Dr. Albert Mehrabian found that 7% of any message is conveyed through words, 38% through certain vocal elements, and 55% through nonverbal elements (facial expressions, gestures, posture, etc). These nonverbal elements are not dictated by our consciousness or logic, they’re dictated by our subconscious and our emotions. Therefore your emotions dictate the dynamic of a conversation. Not just face to face either, it comes across over the phone and via written message.

Hence why gaining self-awareness and learning to self regulate is especially essential for anyone in leadership, sales, communication, or communicating with a potential employer. This is especially important for people being interviewed for an executive position. The position involves leadership. You have to communicate and sell your value proposition, and you want to leave them with a positive impression.

Emotions, like it or not, have a direct effect on the quality of your communication and performance and can increase your susceptibility to burnout. Some people will say that emotions make you weak. Emotions are simply chemical reactions that signal that we’ve interpreted and judged information as either threatening, irrelevant or supportive to our environment or goal. Rather, it’s the inability to understand, deal with, self regulate, or manage that of others that cause people to feel weak. Harnessed properly, emotions are a rich source of information and a powerful tool.

Emotions are contagious. There are striking differences in how people differ in regard to emotional contagion.

Some people may be strong emotional transmitters, meaning they activate the mimicry and synchronization reactions in others.

Your ability to transmit emotions can be gauged primarily by your facial expressions and secondarily by your voice intonations. Being a strong transmitter makes it easier for you to lead and influence others which is why they are favorable attributes for leadership or sales positions.

Some people may have a strong capability to receive the emotions of others, meaning their mimicry and synchronization reactions are easily activated by others.

Your ability to receive predisposes you to easily build rapport. Those who are able to receive and mimic make the others feel more relaxed and as a result, they open up more easily. Rapport and ease allow the receiver and received to share a common point of reference or connection during a conversation.

People typically fall into one of four quadrants:

Those who can both transmit their emotions to others and receive the emotions of others are considered charismatics.

Those who receive emotions easily but do not transmit as well are empathetic. They are more attuned to the people they are communicating with.

Those who transmit but do not receive are expansives. They transmit but they do so without empathy. You see then when people display insensitive or ill-fitting behavior.

Those who neither transmit nor receive are blands. These are the people whom you typically don’t see or remember at events. 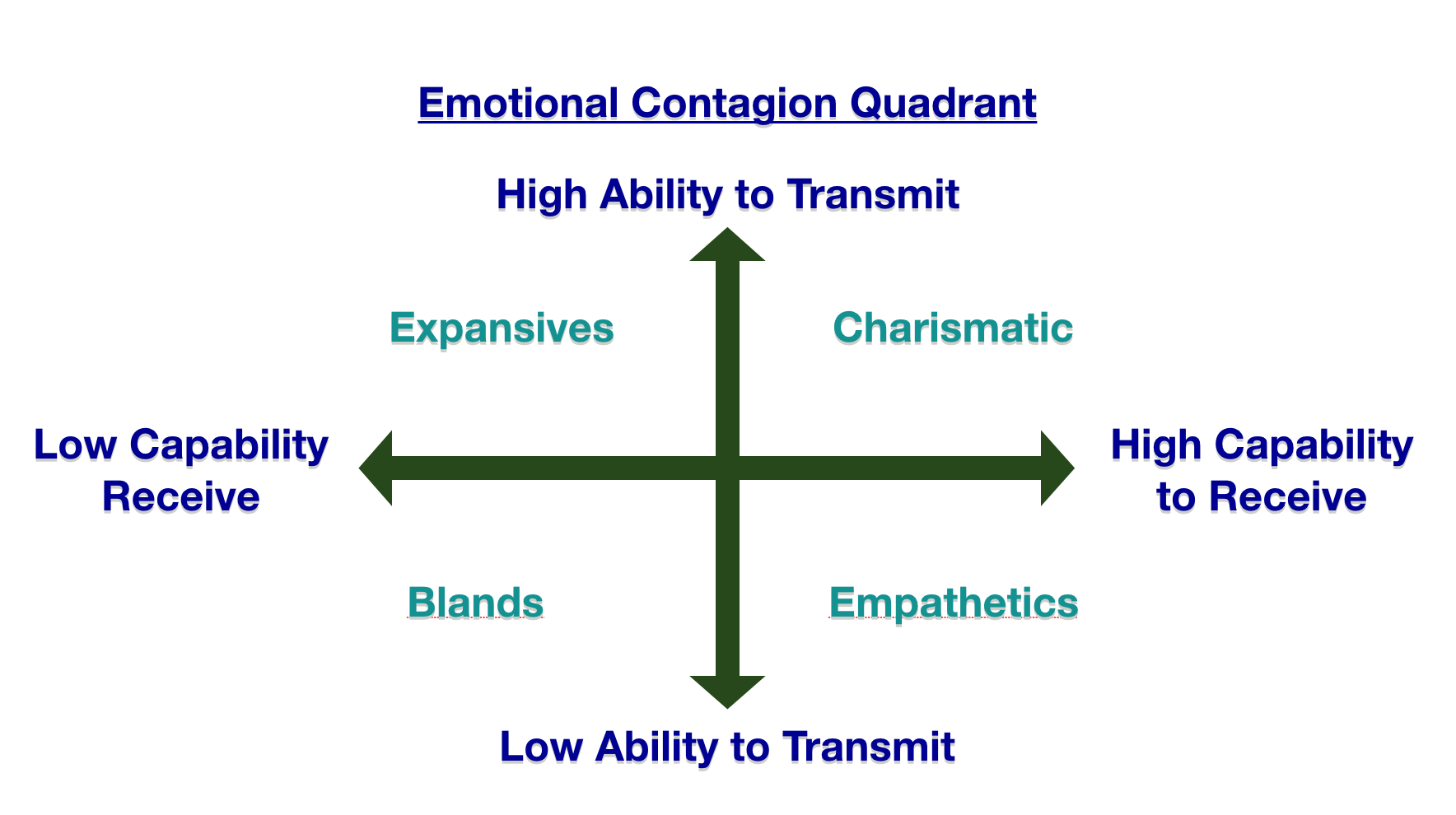 According to Daniel Goleman, author of Emotional Intelligence: Why It Can Matter More Than IQ, the more you’re able to transmit or receive emotions, the more emotionally intelligent you are perceived to be. Organizations may favor charismatics and empathetics for their ability to empathize with, elicit information, and/or lead others, however, they aren’t without their downsides. Charismatics and empathetics can become easily overwhelmed with the negative emotions and complaints that they receive from others, and are therefore more prone to burnout. Furthermore, negative emotions tend to be more intense than positive. Hence why there are more negative emotions expressed in the English language than there are positive. If charismatics and empathetics are consistently exposed to negative situations, those emotions will divert attention and deplete both cognitive and emotional resources, further leading towards burnout if not managed. On a deeper level, charismatics invest a lot of energy leading emotions, and they expend energy to assimilate the emotions they feel. That energy may be compensated for when others mimic them. Empathetics, however, invest a lot of energy in receiving and attuning to others but can feel drained intrinsically afterward because they aren’t able to activate mimicry in others. Furthermore, if you are charismatic, and you’re anxious, nervous or upset, you’re influencing others to be to.

The good news is that while people may be naturally predisposed to one of the four quadrants, your predispositions aren’t fixed. One can learn to be more attuned or more animated. To be more attuned, mirror their emotions if appropriate, paraphrase what they say, empathize with how they feel, or ask questions to get a deeper understanding. To be more animated, raise your energy level. Not artificially with chest-bumping hype. Intrinsically with your conviction. Grounding yourself in your beliefs about yourself, your values, what you’re capable of, people you’ve helped, the difference you can make, the vision and path you’re on, and how good it feels to get a win-win.

For those who are charismatics and empathetics, there are a few ways to avoid burnout. The first is to minimize the amount of negativity you are exposed to. This may not be immediately realistic to some, however, it’s something you can work towards. The second thing you can do is start and close the conversation on a positive note. It’s especially important to close out conversations, regardless if they were positive or negative, by wishing them well and consciously leaving people on a high. If you’re dealing with a negative person who’s determined to stay negative, wish them well and walk away. Know that you can’t help everyone, they have to want it.

If this resonates with you, and you’d like support in how to navigate your own blind spots, contact me!

No Replies to "How Emotionally Contagious are You?"