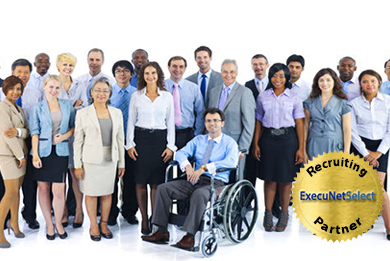 As executive search professionals, we see a lot of . . . sameness. The leadership pages of large technology companies are a homogeneous display of white male faces and telegraphs the obvious – corporate America still has a diversity issue. What’s true for large companies is amplified for venture-backed startups. Anecdotally, I’ve heard from clients that their past recruiters discourage using diversity as a criterion for hiring because it takes too long and it’s “too hard” to find qualified candidates.

In September, Wells Fargo Chief Executive Charles Scharf made headlines while attributing the bank’s lack of diversity to a dearth of “qualified minority talent.” In my experience I can tell you that finding great talent is, of course, challenging, but we shouldn’t turn a speedbump into a roadblock. It’s our job to remind our clients that if the goal is to build an extraordinary company, then it’s necessary to employ exceptional recruiting efforts. It might be extra work, but there is a benefit in finding the so called “unicorns.”

The common refrain is that there simply aren’t enough qualified candidates. It’s the James Damore argument for the lack of representation – that people of color and women simply aren’t interested or skilled enough in technical and mathematical subjects to create a deep enough bench to choose from. So, companies tend to concentrate their diverse hires in cost centers and administration and support roles like marcom, operations and human resources.

For too long there have been too few opportunities on senior leadership teams and Boards of Directors for people of color and women – surprising, given the numerous benefits that diversity brings.

According to Pew Research, the number of women holding STEM jobs in computer-related fields has actually dropped 7% since 1990, as women are choosing to go into the life sciences and health fields with their degrees. Meanwhile Blacks make up just 9% of STEM workers and Hispanics only 7%.

It’s amazing that one of our most influential industries, concentrated in one of our most progressive states, can be both a loud and leading voice for social change and a bastion of “the old boy network” at the same time. Why can’t we disrupt ourselves?

Cognitive Bias Could Be at Fault

The problem might be evolution and the mechanisms humans have built up over the millennia to survive and  prosper. These inherited or ingrained biases are designed to reduce risk and they are self-reinforcing, resulting in an aversion to change or chance. As Stephanie Lampkin, Founder and CEO of Blendoor, an app that uses blind review and analytics to tackle the problem of diversity in hiring notes,

“Cognitive biases are as natural as eating and breathing. Over the majority of our existence on this planet we have found safety in homogeneity. So the way that shows up now is that most of our social networks and content consumption is from people of our same gender and race. This leads to hiring people who look like us, talk like us and act like us.”

The ambiguity effect makes us less likely to choose a path where the chance for a favorable outcome is unknowable.
Anchoring means we rely too heavily on one piece of early information as a determinant for our preferences and choices. For example, a unique name at the top of a resume.

The bandwagon effect means people tend to believe what many others also believe. This might result in us collectively thinking that all CROs must come from certain schools. While confirmation bias makes us recognize only data that reinforces our preconceived notions.

Furthermore, a tendency to select for those who have “sat in the seat” as CEO, CFO, CRO at least once before is locking women and people of color out of these roles. So while there has been a general upward trend since the late 90’s of diverse C-suite inclusion, the overwhelming majority of Fortune 500 CEOs remain men (94%) and white (99%).

The lack of diversity is not rooted in malice - in the end, our networks (neural and social) may be to blame.

The technology industry is driven by data and a desire to follow the data to get to scale and success. It should follow that we ought to search high and low to find diverse hires since the impact on performance is real. Yet, according to a recent study based on the EEO-1 reports of 117 silicon valley companies, this has not been the case. The percentage of executives was heavily weighted towards white men (59%). White women held just 15% of executive positions.
Among people of color, Asian men made up 16% while Asian women made up 4.5%. For Latinos, men are 2% and women just 0.8%. The most underrepresented are black men and women with 1% and 0.4% respectively.

The Business Case is Solved

The need for change is obvious from a sociological point of view, but what about the bottom line? Fortunately, here too the numbers support the case for more diversity, especially in the areas most important to startup and VC communities – increased innovation and revenue acceleration.

A recent BCG study found that companies with above average diversity in their leadership had greater innovation (producing more new products) and nearly double the innovation revenue than companies with below average
diversity.

This should be music to our collective ears and justify any perceived extra effort required to find diverse hires.

Additionally, in their 2017 study, Why Diversity Matters, McKinsey & Company found a direct correlation between diverse leadership and better financial performance relative to peers. Companies in the top quartile for gender
diversity are 21% more likely to experience above average profitability, and those in the top quartile for ethnic diversity were 33% more likely to outperform on EBIT margin.

In contrast, companies in the fourth quartile for gender and ethnic diversity are 29% more likely to underperform their peers economically.

The Peterson Institute for International Economics found in 2016 that going from 0% to 30% female leadership correlated to a 15% improvement in profitability or a 1% improvement in margin for a typical firm.

It pays to look for unicorns, especially if you want to build a unicorn.

In addition to the economic forces that should be forcing change, there is a growing culture shift that is demanding it. More and more millennials – who will constitute 75% of the workplace by 2025 – view diversity as an important factor in employment decisions - 47% vs 37% and 33% for Gen X and Boomers respectively.

They are also looking at the D&I policies of the companies they choose to patronize. In my home, my teenage daughter routinely scrutinizes the policies and positions of companies regarding their stance on bias and diversity before making any purchases.

And she is not alone. 51% of younger millennials are more likely to shop at a retailer that demonstrates awareness of such issues according to Accenture. So, this is a widespread and growing phenomenon among her peer group driven by the technological advancements of three of our greatest success stories: Facebook/Instagram, Twitter and Google.

Access to networks, news and information have amplified any wrong steps brands have made, forcing them to acknowledge their shortcomings and move towards change.

Does it Take a Village or the Court System?

It’s my job to find the best talent for my clients – people who will help propel their growth – so I’m a huge proponent of diversity and inclusion, given the advantages cited earlier. A recent article in TechCrunch, Top VCs Discuss the Future of New York Start-Ups, really sharpened my focus on the need for a change in the public mindset.

The author had interviewed nine top VCs about their opinion on the market – nine male, mostly white VCs. It seemed astonishing to me that he couldn’t find one woman to talk to, so I sent him a message suggesting a few women he ought to interview. To his credit, he revised the story to include these important voices. Do I think he was malicious in the first place? No. Lazy? Perhaps. Did he just do what everyone else would have done? Surely. And therein lies the problem.

If we continue to do what we’ve always done, what everyone else has always done, there will be no meaningful change unless, of course, the courts step in. In 2017, California passed SB 826 to mandate female participation on corporate boards for companies headquartered in the state.

So now, if a company board has six or more board members, three must be women. If it has five then two must be women, and if it is four or less at least one must be a woman. But do we really need laws to do what’s morally and economically right? Will it take the state’s mandate to see more black and brown faces in boardrooms? We should be better and smarter than that.

Diversity and inclusion have been growing in the public consciousness, but there is work we can do to help shorten the arc of the moral universe.

Apps like Blendoor, which aggregate diverse talent and anonymize recruits can help – mainly by making hiring managers and leadership teams aware of their blind spots. As Founder and CEO, Stephanie Lampkin says,

“People believe they are more fair than they really are. Our biggest ‘aha’ moments come in the pre-screening phase when companies are evaluating candidates, not knowing their race or gender, and then later realize that they probably would not have considered this person or assumed they were female.”

It’s this awareness, driven by data and transparency tracked in the app, that will lead to change. But even Stephanie is skeptical of the power of just apps to make change.

“There is no historical evidence to suggest technology companies will solve this problem on their own. I do not believe that tech executives and middle management are incentivized to solve this problem. It will require pressure from employees demanding more change, BODs to require more transparency, it will require the press to hold the companies accountable and the government to require companies to report on their progress just like they do on their financial metrics.”

They say in business that you can’t manage what you don’t measure, so let’s start measuring our progress in D&I.
Investors, startups and scaleup tech companies can lead the way by making a pledge to prioritize their D&I policy in
2020 and beyond.

And by incentivizing the behavior we want and adjusting compensation to reflect not only revenue and profits but the racial and gender makeup of the team.

It is by actively and intentionally prioritizing, investing in and incentivizing diverse hiring and promotion that we will make change happen. If we take concrete steps towards doing just that, we might find we change the world in the process.

MERCEDES CHATFIELD-TAYLOR is managing partner of Caldwell’s Private Equity and Venture Capital Practice and a member of the technology, consumer, digital and media teams. She focuses on executive-level search for high-growth technology companies, with deep expertise in B2B SaaS, social, eCommerce, gaming and other  transformative technologies.

GINA BARGE is a consultant in Caldwell’s Private Equity and Venture Capital Practice. She focuses on executive level search for senior leaders within high-growth technology portfolio companies, including software as a service, e-commerce, internet, and consumer. Gina’s experience spans multiple C-suite functions, as well as marketing and sales leadership roles.

No Replies to "Diversity Matters"