The Best Networking Book I Have Ever Read

That’s a tough title to live up to coming from someone who works at a company that teaches networking to executives and believes in networking so powerfully that the founder incorporated networking into the company’s very name. But author Matthew Pollard had me with the first line of his newest book: “You’d rather get a root canal than go to a networking event.” An instant connection was formed when I read that. Matthew was like me, and so many ExecuNet members: not at all comfortable forcing conversation with a room full of strangers. The superficial nothingness. The banal pleasantries and polite inquiries with no real interest. Trying to look natural. Catching them looking past you for the next person to meet. It’s all so forced, fake and feels useless! 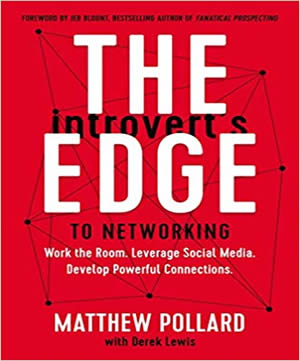 Not if you apply Matthew Pollard’s networking principles.

Networking, if done right, is incredibly helpful to a career and does not have to be uncomfortable. The “doing it right” part is the problem.

Not if you apply Matthew Pollard’s networking principles.

That was worth saying twice, just to make sure you didn’t miss it.

For introverts networking is at least twice as hard as it is for extroverts. Like Matthew, I am one, so trust me, I know he is not wrong on this. What Matthew did in The Introvert’s Edge to Networking is provide in detail a system for introverts anyone to become a master networker. Basically, we all pretty much wing it, especially at networking events. For introverts this is especially challenging. Being introverted doesn’t mean you cannot think on your feet; but it does mean traditional networking of casting a wide net and seeing how it goes feels uncomfortable for us.

It’s uncomfortable because we intuitively know that’s not going to be effective. We need a strategy, a plan, to give what we are doing meaning and turn those encounters into meaningful connections, not just another face on your LinkedIn list of “contacts.”

What Matthew explains is that the quality of your contacts is vital to your success. Just like we do at ExecuNet, Matthew believes in approaching networking with a helping mindset and with a plan. In his system, he teaches people not to create transactional relationships. He provides several examples of how great benefit, life-changing benefit, came from side-stepping short-term gain and seeking a genuine connection. He identifies three types of connections, what they can do for us, what we can do for them, and how to cultivate them.

In the book, Matthew outlines how to do this in easy to follow language and stories. In fact, the book reads like an email from a friend. I was about 75-80 pages in when I found myself pausing and wondering, “When is he going to get to the meat of the book?” I flipped to the table of contents, saw what sections I had read and that I was now in the storytelling section and realized he had so masterfully crafted his storytelling that I hadn’t even picked up that he was telling me a story!

That is one of his networking strategies which he explains in his book. Obviously, it works very well in book writing, too!

Matthew went on to explain the concept of “neural coupling” discovered by a Princeton neuroscientist named Uri Hasson in which when we hear a story, our brains begin to synchronize with the storyteller’s. In other words, me telling you a story synchronizes our brain waves! That’s why storytelling is so timeless – and so effective as a networking strategy. There’s actually science behind it. At ExecuNet, we teach storytelling as the best way to share one’s unique value with others, whether they are networking connections or possible employers.

Not surprisingly, one of Matthew’s networking strategies focuses on identifying and articulating through a story one’s unique value. Is it really any wonder Matthew is a part of the ExecuNet community? We’re all about that!

What Matthew does in this book is create a system for you. He doesn’t just say, “tell a story.” He actually provides you with a framework to build a script around so that you can have three stories to serve as your core message and a philosophy of networking to bring to every encounter. You begin every encounter with an opening that is certain to evoke interest and channel the conversation right into one of your prepared stories, getting the conversation started and in a way in which you are very comfortable. It’s brilliant, and anyone can do it.

Think of it this way: Have you ever seen the movie Hitch with Will Smith? Will Smith played a man called Hitch who helped good, but kind of hopeless with women, guys get out of their own way by providing them with a framework, a system, a way of thinking and speaking to find love. Matthew’s book is your Hitch – your guide to networking success.

Employed or in job search, this book will help you do better and be better – quickly.

No Replies to "The Best Networking Book I Have Ever Read"