At some large firms, 50% of the workforce is comprised of independent contractors or freelancers. But that may change in the next decade.

Over the last 30 years, the workplace has been pushing toward the gig economy. Pensions have disappeared, putting the onus of retirement on individuals, and evolving technology has allowed people to work remotely and for multiple clients. Individuals now earn incomes on their own time and under their own boss mentality. 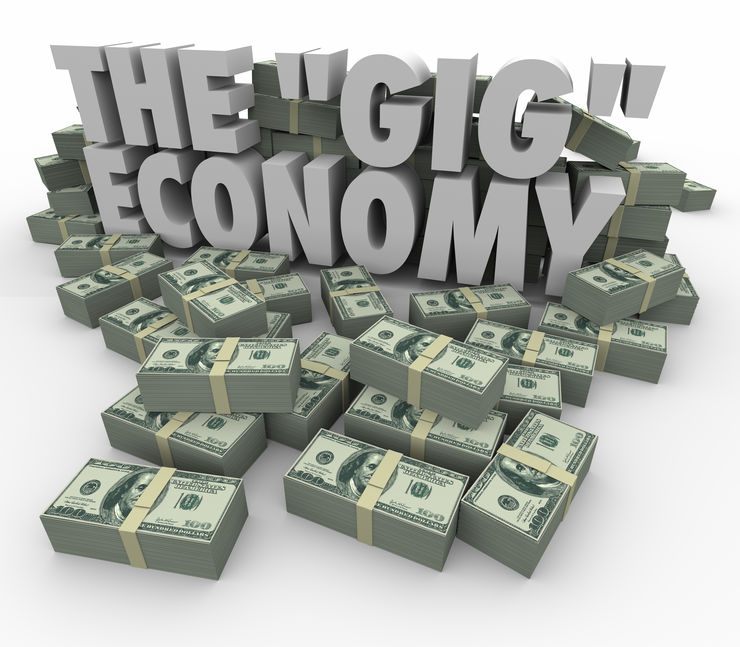 But as with most major changes in the workplace, there have been some unintended consequences. Some workers are waking up to the idea that gig work isn’t as great as they thought it would be. And despite the fact that some large firms already have a workforce that’s 20% to 50% comprised of independent contractors or freelancers, companies are realizing the limitations of how much gig work they can use, particularly if they operate in a niche industry that requires highly skilled professionals.

Part of what made the gig economy so popular was the confluence of technology and the Great Recession.

Indeed, research from labor-market scholars shows that gig-economy work rose rapidly through 2015, but those numbers slowed in 2017, in part because of a stronger labor market in which people didn’t need to supplement their incomes as much as they did in the years following the Great Recession.

While the gig economy isn’t likely to vanish in the next decade, there are likely to be significant shifts in how workers and firms treat such arrangements. Here’s what you can expect, and how to capitalize on those changes.

In 2019, California became the first state to pass a law that requires many contract workers to be treated like regular employees—meaning firms may need to meet minimum-wage requirements and overtime, along with other potential benefits traditionally allocated to employees. Similar laws are being considered in New York and New Jersey. While it’s unclear whether such efforts will be just a hiccup in the gig economy, they’re already making some companies think differently about how they should handle contingent workers.

Highly Skilled Niche Gig Workers Are Raking it In

While we often hear about the low wages and commoditization of the gig economy, some freelance positions that require specific skills that can’t be easily replicated are pulling in major money, says Dorie Clark, an adjunct professor at Duke University’s Fuqua School of Business. Indeed, according to a gig-economy index from B2B platform Pymnts, 40% of gig-economy workers now earn more than $100,000 per year. The key to earning so much, however, lies in the ability to offer skills that are desperately needed and can’t be trained quickly via corporate programs.

To some extent, the gig economy lays open a fact that’s always been the case in corporate life but hasn’t been acknowledged: unless you have a long-term contract, your company can let you go whenever it wants to, Clark says. Indeed, Accenture has predicted that within 10 years, a Forbes Global 2000 company won’t have any full-time employees outside of the C-suite. “It can be very alarming to go from having an income to having zero income overnight,” Clark says.

Part of what made the gig economy so popular was the confluence of technology and the Great Recession. Such jobs allowed people to stay afloat by cobbling together a patchwork of gig work. But now, some studies show much of the gig economy is being driven by professionals with traditional jobs who are supplementing that income with gig work, or using it to get through rocky financial situations, instead of using it to create a full-time job.

As red-hot professionals see their opportunities expand, some companies are starting to rethink how to attract employees who easily could go off on their own. This has led to a shift in thinking among human resources departments; flexible working arrangements are expected, and there’s much more room for negotiation in signing bonuses, tuition reimbursement, and pet insurance. “It behooves companies to think about creating an environment where people are so loyal that if other opportunities arise, they wouldn’t want them,” Clark says.

What you can do:

Tap Into Your Intrinsic Motivation

Gone are the days when your company “magically moved you along the career escalator,” Clark says. These days, work is more akin to how it was in the nineteenth century, when people were largely self-employed. “If you were a carpenter and people didn’t want to buy your cabinets, you were out of luck,” she adds. In a marketplace where people can make conscious decisions about whom to hire, workers need to seek out training opportunities and ways to stay relevant in their industry on their own.

While the constant disruption, automation, and continuous learning can make it seem like a never-ending roller coaster to stay relevant, it’s important for professionals to consciously reevaluate where they are and what they want. This could range from refreshing a skill set to deciding to completely change careers every 10 years. Clark says this becomes all the more important as you age, making midcareer professionals prime targets for making efforts to learn something new or consider a different career trajectory. Adopting a “portfolio career” mind-set—one in which you aim to have multiple income streams in your business so that if one gets disrupted, the flow doesn’t completely stop—can also be a way forward during these turbulent times.

In such a noisy work world, it can be hard to even think about trying to distinguish yourself. But that’s all the more reason why you need to cultivate a strong brand that’s able to cut through the noisemakers out there. “If you’re viewed as trusted and pre-vetted, then it’s going to be easier to get a high-quality income,” Clark says. One way to go about this is to develop a concerted strategy to build professional relationships outside of your company. You can start by trying to present at conferences or getting involved in an industry association. By taking proactive steps to raise your visibility, you’re not only setting yourself up to be seen as an expert in your field, you’re also showing your company that they can’t afford to take you for granted.